Say It Again: Ideas for Retelling

All educators in early years education spend a lot of time working on getting children to re-tell stories. There are so many language developments linked to this simple activity – “story-related comprehension and expressive vocabulary as well as nonstory-related receptive language and early literacy development” (Dunst et al., 2012).

However, it can feel a bit dull, asking “what happened next?” again and again. To this end, I’ve been working on developing a range of strategies to keep this fresh and ensure the children are always invested in developing these all important retelling skills.

Sheep in a Jeep – all we needed was a few hula hoops and we had ourselves a Jeep for the sheep to ride in! The children loved pretending to push the Jeep out of the mud, and were rolling around laughing by the time we crashed into the tree! Using the learners to create the objects in the story as well as the characters gives them more opportunities to be involved…and makes it so much more memorable! 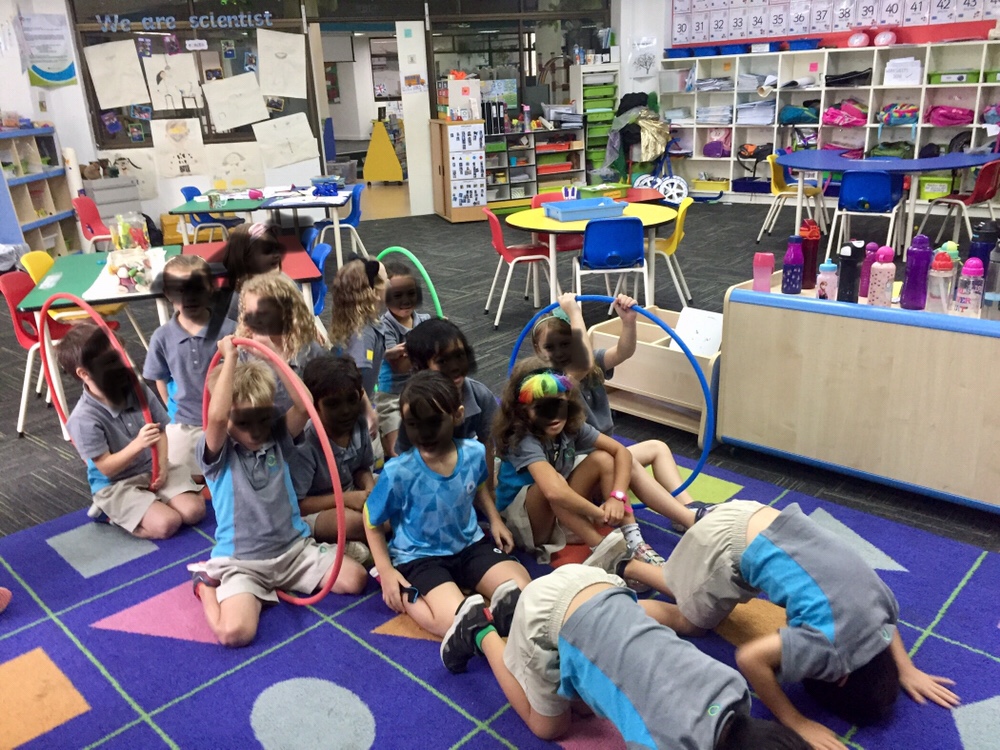 The photo I’ve used here is actually the learners creating their own version of a story (I love Pie Corbett’s ‘imitation and invention’ approach), however this would work just as well to retell a story. Here, the learners were creating a new version of Handa’s Surprise. It’s a great method, particularly if the character goes on a journey in the story. It’s also easily differentiated (how much they need to include) and a fabulous form of assessment when looking at how much detail they have taken in.  The example below is whole class, which we did as an example.  The learners then created individual story maps.

I’ve already shown a whole-class approach to retelling and an individual one. This works well for small groups. This was our Handa’s Surprise retelling. I printed the characters from Twinkl, mainly so the learners could stay focused on recreating the setting and retelling the story. You could easily get them to draw the whole thing. When doing collage I tend to throw out a load of resources, and tell the learners they can use other stuff but need to check with me first. The group skills that are developed in these activities are an added bonus!!

Sorry, I don’t have any great photos of this one! I was sat at a table wondering if there were any apps which I could utilise to take story telling in a different direction, when I noticed that the table I was sat at was green… and that gave me a great idea! Our class iPads already had the ‘Green Screen’ app, so I had a play around, making small puppets where we coloured the lollipop sticks green. It worked!! After some trial and error, we found the table had to be stood on its side, and had to be high up enough for the learners to sit comfortable beneath it. We used this for the Enormous Turnip.

We’re back to Handa’s Surprise again – sorry! I am sure we did this with the Hungry Caterpillar as well but the videos are hiding from me. There are several ways you can use the app Explain Everything. In the example below, the learners took photos of different sections of their collage, then retold the story. You can also get them to draw out the story directly into the app, or give them a series of photos from the story which they must arrange and then narrate. With my 5 year olds, I use simple mode.

The example below is not a retelling activity; I haven’t used this app for retelling yet but while I was flicking through the videos I thought it would work really well. Just choose a character from the story, take a photo of them, put in the app, then the learner tells the story from the viewpoint of that character.

I hope these have given you some fresh ideas for retelling!